We all have a father and a mother, and whether they have been present or absent in our lives, we are all aware that their roles and their impact on our lives have been very different.

As mentioned on page 159 of Winning with Honour, ask any child what he thinks, and he or she will tell you that their mother and father are different. As one saying goes: “The mother buys the toy; the father is the toy!”

No doubt there is a degree of stereotyping here, and sometimes the roles are reversed, but most times, the mother is the protector and comforter, while the father is the encourager and adventurer. This is because men and women are largely different by nature and react differently instinctively when placed in the same situation.

And children know these differences quite instinctively as well. Three children aged five, eight and eleven watched an award-winning short film about a puma going after a bear cub.

The puma got so close that he scratched the face of the cub with his front paw, but at the end of the film, the puma unexpectedly simply slinked away and left the cub alone. The next shot showed a huge bear behind the cub, which of course was the reason for the puma giving up his prey.

When the children were asked whether the huge bear was a mama bear or a papa bear. All three said it was a mama bear. The oldest said that in the animal world, the papa simply disappears and leaves the mama to take care of the babies. The middle child said that in the animal world, the mama is always the one fighting to protect her children. The youngest one said it was a mama bear, because she licked the blood off the wound on the face of the bear cub. The instincts of the three children were clear and immediate: The role of the mother is to protect and comfort her children.

And this role of a mother and the ability of a mother to touch and inspire her offspring is beautifully displayed in this short film, Ah Leong’s Story.

Happy Mother’s Day to all mothers, foster mothers, and god-mothers! May you continue to touch and inspire the children in your lives with your love and strength.

On this Labour Day holiday in Singapore, be inspired by this migrant worker’s rags-to-riches story and his big-hearted ex-employer who encouraged him to strike it out on his own. You can read the full article that was published in the Straits Times here.

The son of poor rice farmers in India, Mr Mani came to Singapore as a penniless migrant worker. Through his resourcefulness and eagerness to learn, he became a boss of his own company that recorded a revenue of S$2.5 million last year.

Mr Mani alludes his success to God and his former employer, Mr Ang, who taught him and encouraged him to strike it out on his own. Mr Mani said of Mr Ang: “He said, ‘You go out and fight. If you are not successful, you can come back.’ Where to find boss like that? Even I cannot be like that. I was so happy I cried,” he says.

With Mr Ang’s blessings, Mr Mani started his own company while he was still working for Mr Ang’s company. When he eventually quit his job to focus full time on his own company, his generous ex-employer, Mr Ang, passed him contracts.

When asked why he was so generous to his ex-employee, Mr Ang said: “It’s very simple. I’m growing old. There’s also a lot of work to go around. If he can chiong, let him do it,” he says, using the Hokkien word which means to take risks. “You cannot keep everything for yourself. Anyway, if he’s successful, I’m happy for him.”

Mr Mani said: “Workers are very important. Without them, we are nothing.” He added: “I’m very lucky. All my Singaporean customers have been very good to me. They like me and give me a lot of jobs.” He also shared in the video that accompanies the article: “If you work hard in Singapore, you don’t have to worry. If you’re lazy, you have to worry.” 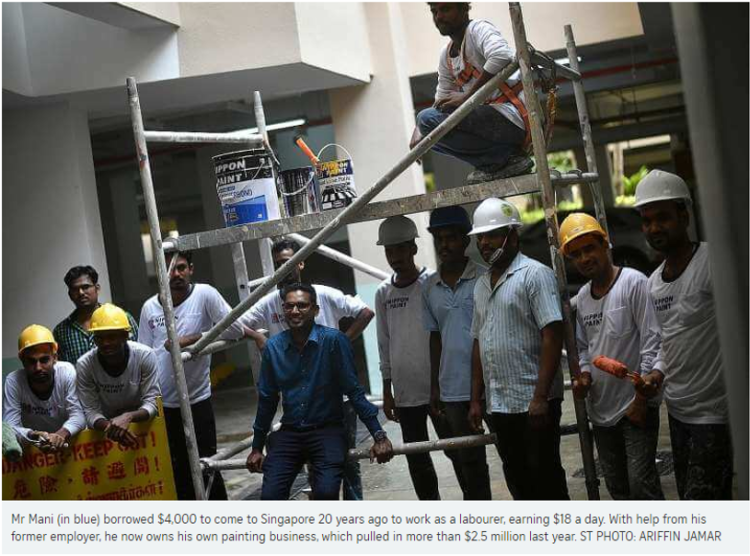