Of the many recipients of National Day Awards this year, I knew 40 of them personally, so I sent congratulatory emails to them all.

Interestingly, not a single one of them responded by simply thanking me for my good wishes – every one of them commended their colleagues as having been the real reason for their successful contributions towards the well-being of Singapore. Some said they consider themselves to be receiving the award on behalf of their colleagues.

To me, this is truly remarkable, and a testimony to the oneness most Singaporeans feel not simply as a nation, but also at their workplaces.

And oftentimes doing good is by helping others come up and become the best that they can be.  I am reminded of the words of Laozi, an ancient Chinese philosopher.

Earlier this week, Mr Lui Tuck Yew, Minister for Transport, announced that he would not be standing in the coming general elections, despite the Prime Minister’s expression of full confidence in him and intention to appoint him to the Cabinet if he were to be re-elected.

One can only guess why Mr Lui has decided to quit politics. The transport portfolio has, no doubt, been highly demanding, given public expectation of smooth and fast rides with no breakdowns.  And, equally without doubt, Mr Lui has poured heart and soul into his responsibilities. 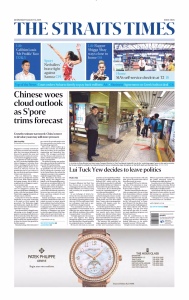 The social media has been chattering with people giving their reactions to Mr Lui’s departure.

Among them are comments which suggest that Mr Lui was in fact removed because of inadequacies in Singapore’s transportation operations, rather than that he had decided on his own to let another take on the task. The tone of the comments even suggest a measure of delight at this happening. It demonstrates a “blame and retribution” culture that tends to diminish performance rather than enhance performance.

Think about it:  through all the breakdowns, Mr Lui would have learnt an enormous lot about what can and should be done about the transportation system, and for us to think that the smartest thing the government should do is to remove him cannot make sense – the result is that someone else will come on who will have to learn all the large and small things about the transportation system all over again.

Speaking of the “blame and retribution culture” with respect to Mr Lui is only by way of illustration.  It often takes place in companies and organisations.  It cannot be smart for leaders to act in this way.

By all means remove the incompetent and irresponsible, but as long as people have the willingness and capacity to change and to learn, removing the person for mistakes will only undermine risk-taking, creativity and innovation, which are the very essence of new idea creation and continuous improvement.

An open mind and an open heart make for creativity, innovation, progress, and productivity!

We have talked about how good leaders need the gumption to fail in our previous post. Leaders who are afraid to fail will not make good leaders, because they will simply be led by what their followers or target audience(s) want them to do rather than what would be good for their followers/ target audiences in the long-term, which they may not know or are able to express at the current moment.

Somewhat related to this idea is the thought that: “We must not become addicted to the praises of others.  If we don’t live by their praises, we’ll not die by their criticisms.”

Not only is it necessary for us to be clear why we do what we do, we need to have the drive and determination to keep pushing to get done what needs to be done.

It would be appropriate that we address the issue of energy.  Energy is what we need to keep going despite the difficulties and critics and sceptics and cynics.

There are four kinds of energy:

A careful awareness of the cultivation and usage of our energy, especially our Spiritual Energy, helps us to more successfully live out the adage: “If we don’t live by the praises of others, we’ll not die by their criticisms.”